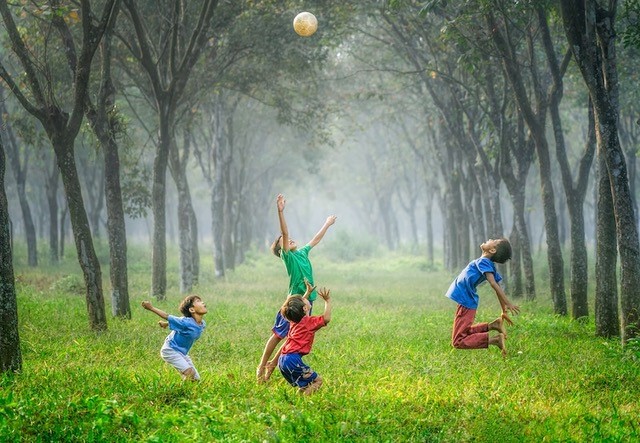 How has something instinctive become a right we have to knowingly make time for?

Circumstance should not decide kids’ right to play, feel safe and explore the world. Every child has the right to play. Through play, we learn. I don’t mean giving a child a set of brightly coloured objects and telling them the rules of a game to play; rather unhinged self-initiated play! The kind that wows a parent with ingenuity because it was created by the child. Drawn from their own curiosity and sense of belonging in this world.

“Perhaps play would be more respected if we called it something like “self-motivated practice of life skills,” but that would remove the light-heartedness from it and thereby reduce its effectiveness. So, we are stuck with the paradox. We must accept play’s triviality in order to realize its profundity.”

The potential of children

When I first came across UNICEF it was very much solely to do with winning awards as a school for the Right Respecting Schools award. Increasing awareness in children of self-worth and empowering them in their school communities and homes.

Previous to this I cycled across India. I learnt how vast the difference in educational standards can be from village to town to city.  Yet, I witnessed so many children playing. Their inventiveness was an awakening to the potential of children. It was upon my return to Kent that I felt teacher training was the way forward. To learn how to teach, then to put into practice how I felt I should teach. The difference here is paramount. I went into teaching to play with the best minds in Kent – a class of 31 brimming with potential.

The achievements of UNICEF over the past 70 years has drawn the international community of children together in a common understanding that this world belongs to them. It entitles them with a chance to achieve their full potential. For example,  IKEA Foundation coordinated ‘Let’s Play for Change’ where the initiative, driven by play, assisted in children’s chances of optimal brain development. The funding from in-store donations gave UNICEF the ability to reach nearly 60,000 young children in China, India, Indonesia and Kenya with nurturing care programmes.

The initiative forms part of the IKEA Foundation’s Good Cause campaign. It supports early childhood development. It also helps give children inclusive access to play and sport. The funds from the campaign support the work of Handicap International Federation, Room to Read, Save the Children, Special Olympics, UNICEF and War Child.

Internationally, access to safety is a first step for many children to make play possible. As stated by Per Heggenes, CEO of IKEA Foundation,

“War and disasters are forcing more children than ever before to flee their homes and make difficult and dangerous journeys … we are committed to upholding and raising awareness of their rights.”

Brains are at their most rapid point of development during childhood. The experiences we have form us as a person in later life. Whether we champion disruption in our young lives or hold onto it in the corner of our minds, it determines the member of society we become, and our emotional well-being to survive.

“When the brains and bodies of young children are protected, nurtured and stimulated they have the best possible chance of developing fully, learning effectively, and contributing to their economies and societies when they reach adulthood.”

In September 2016, The LEGO Group, the LEGO Foundation and UNICEF launched a campaign to celebrate and inspire play and learning, with a focus on parental interaction. LEGO sought to celebrate the special relationships between parents and children. The aim being to inspire families to explore new ways to help young children play and learn. The ‘Partners in Play’ campaign sought to raise awareness with parents through uploading images of play in action on social media using the #PartnersInPlay hashtag. The LEGO Foundation’s support of UNICEF’s work has led to LEGO DUPLO bricks being distributed to 73,000 children in 365 early childhood development centres and child-friendly spaces in Jordan. This includes training to educators and caregivers on innovative ways to play.

“Play is not just a fun diversion,” said Mirjam Schöning, Head of Programme in the LEGO Foundation.

“A growing body of evidence shows the importance of play in reducing anxiety as well as learning essential skills for our changing society, such as communication, collaboration and creative problem-solving. We are delighted that we can provide play materials and training to the practitioners supporting Syrian refugee children.”

Mirjam Schöning, Head of Programme in the LEGO Foundation.

In the Syrian Arab Republic, the need to play without fear is being addressed by volunteer-run projects. The ‘Land of Childhood’ is such a project, a fusion of playground and theme park. The adjoining basements offer the children a safe space to live normal childhoods and meet with friends, despite escalating violence. Areas cut off from sustained humanitarian aid and basic services has resulted in nearly 500,000 children living in besieged areas. The threat of constant attacks gave the spur to a group of young architects, such as Yaseen, to make possible opportunities of relief.

Out of The Box partnerships also envisages safe spaces for play opportunities. In Addis Ababa, for example, creator Sally Duncan witnessed the need for safe play spaces during her time there. Sally returned with Out of the Box partnerships and sought investment to provide the community with a place of safety that enabled ‘the child to feel respected and valued within their immediate community’. Sally’s team’s innovative approach to addressing the lack of playgrounds and recreational facilities in Ethiopia has paid off. They completed another successful project earlier this year with another underway for next year. The adventure playground has benefited the community by creating a heart hub for interaction and sharing between both children and adult carers.

In a generation that wants the best for its children, set against the backdrop of mental issues rising in young people, will we stop in time in the ‘rat run’ of life before our own children become adults? When will we actually work hard and play harder when it comes to time with our children? There shouldn’t be the demand on parents to part-time parent and struggle to balance responsibilities. Play is rewarding all round when time and opportunity are created. Beyond the rules and parameters of ‘safe’ prescriptive play are moments of pure awesomeness. And without fail blowing adult’s minds as they step back into the creative Narnian wardrobe of imagination. So, what are you waiting for? Go out and PLAY!

Further reading on our blog post: “Children need to play”

Disclaimer: This article has been written independently and Kitcamp does not receive any support, financial or otherwise, from any of the companies mentioned in this article.